Ohm Force is a French software manufacturer, responsible for distortion plug-ins like Ohmicide and filters like Frohmage that are used by the likes of Skrillex and Trent Reznor. Having already built a name for themselves with their plugins, the company now aims to break into the world of DAWs, with their collaborative sequencer, Ohm Studio. In order to gain more insight into their products, I sat down with the company’s lead developer, Raphael Dinge, and picked his brain on what the company is currently up to.

Hi Raphael. Can you tell me a bit about your background and how you got into the software industry?

I was born in 1976, and a few years later was programming on computers with an old Apple II. I had a friend called Julien Boeuf who wanted to start an audio company with his best friend, Laurent de Soras, and his cousin, Gregory Makles. Since we were all doing music and most of us were into programming, getting into this industry seemed like a good idea. I’d been studying mostly mathematics, while almost all the others did engineering in school, and Laurent had to teach me how to code. So we started the company whilst we were still in school.

I’m the Lead Developer on our Ohm Studio project. It involves a lot of R&D, programming, and some graphic design. My role changed quite a lot over time though. When I begun, I was the only developer on Mac, so I was mainly porting our Windows plug-ins.

Everybody in the company generally has multiple roles. For example, our CEO, Franck Bacquet, is the one who redesigned our websites from scratch.

Can you give me a breakdown of what Ohm Studio is and what it does?

Ohm Studio is the first real-time collaborative DAW. It’s a standalone workstation which supports professional standards like VST, audio recording,MIDI and it has a full-featured mixer. Its look is very similar to other DAWs, except for the chat window on the left when you’re working on a project. Its distinctive feature is online collaboration. You can get in touch with other musicians, invite them to your project, share ideas and work on the same project at the same time in real-time.

What led you to guys to decide to create Ohm Studio?

Actually, the Ohm Studio concept was the starting point of the company. We made plug-ins only because we had no money to fund the software, and needed a way to do so. Incidentally, Ohm Force became a renowned plug-ins manufacturer thanks to Laurent’s incredible work on DSP. After a few years of making plugins, we were able to start the developing Ohm Studio. 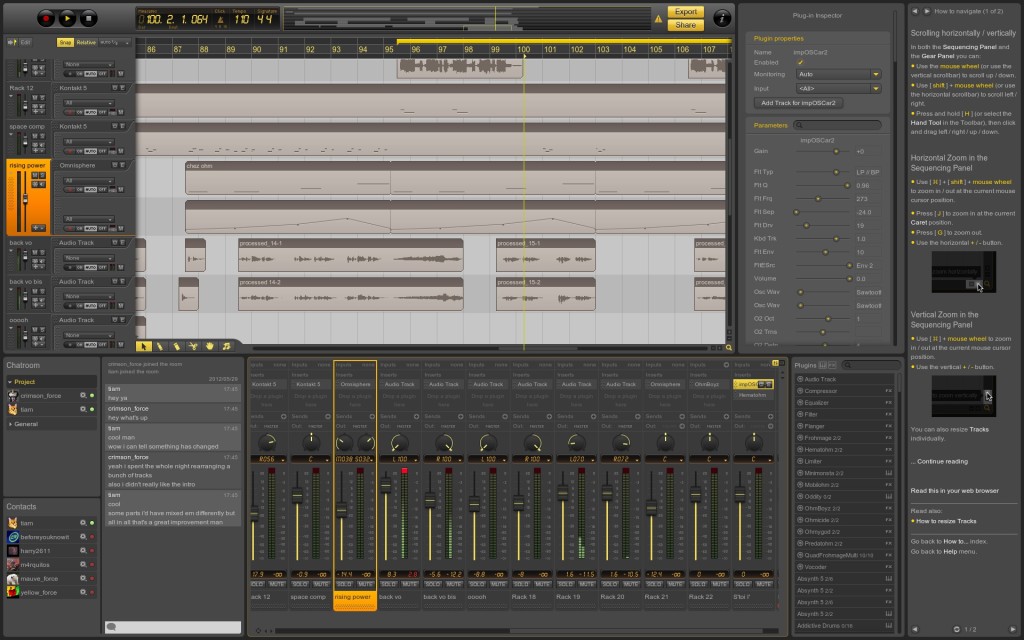 Ohm Studio breaks new ground in terms of collaboration, but does it have any other features that set it apart from it’s competitors?

Apart from the collaborative technology, we have the “Rack” feature, which has had a very positive response from our users. This simply allows users to create multiple tracks (audio or MIDI) for one instrument, particularly in the case of romplers, with one different instrument on each MIDI channel. This allows for non-destructive “touch” parameter automation, for example.

We also have a “zooming user interface”. This is difficult to describe, but a lot of our users gave us very positive feedback on it. It allows you to navigate very fast in your song, while not getting lost, and this is the first time such a concept has been used in a DAW.

How has the beta testing been going?

The beta test has lasted a long time. Our testers gave us feedback on the GUI and the feature that were missing. We’ve been closely listening to them and adding features, as well as correcting bugs. It required a lot of work to make VST plug-ins work, and we fine-tuned the GUI a lot; the first version and the current version look like completely different pieces of software.

Our testers are quite satisfied now. Some features are missing, but being able to create music with other musicians is an absolutely unique feature. We have the general chat which is public, and from time to time we have some great comments, and some funny ones, like, “Using Ohm Studio allowed me to stop playing World of Warcraft” and “At this pace, my wife is going to ask for divorce. I wish I never discovered Ohm Studio“. 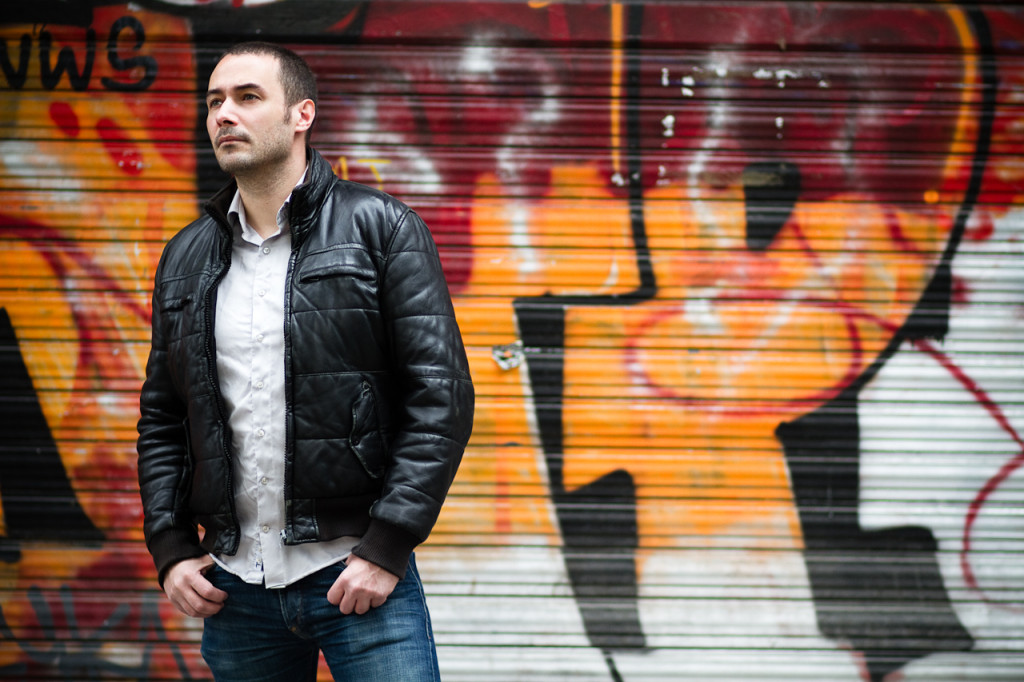 Given that Ohm Studio’s trademark feature is it’s collaborative features, how does it fare for those without Internet access?

As of now, an internet connection is required in order to use Ohm Studio. As a lot of our users asked for the possibility to work “offline”, we started to look more into this. Some people want to be able to work on the road, and re-synchronize seamlessly when reconnecting, while other people only wanted a way not to appear online.

Won’t the limited Internet bandwidth of some people hamper their progress with Ohm Studio?

In practice, and quite surprisingly, bandwidth did not appear to be an issue at all. Each user action will only send the difference he applied to the project, which is in most cases just a few bytes long. There are some concerns when using VST plug-ins such as Kontakt, where the presets might be huge, as well as when transferring audio. However, this was never a real issue to our users, or at least it wasn’t reported as one. We’ll continue to fine tune it a bit, like handling unexpected disconnections a little bit nicer.

Not for now, but users can use their 64-bit VST plug-ins by using J-bridge. It should be noted however that the audio engine is running as a separate application from the GUI. This means that our GUI doesn’t consume memory that otherwise should be used for the plug-ins. That said, we’re working on a 64-bit version already.

Is the long-term goal for Ohm Studio to compete with other DAWs on the market, or are you guys trying to create a new lane for yourself?

It’s a difficult question to answer. All users have different ways to work, and have different preferences that will lead to the choice of a DAW. We want to enhance Ohm Studio’s features to match our user’s need, whilst at the same time enhancing inter-operability with other DAWs.

Should we try to compete with other DAWs? I think we have a chance, yes. Technically speaking, this is something you can see with DAWs like Presonus Studio One, and perhaps BitWig. The idea is that as time goes by, making changes to a piece of software takes more time. At some point, you probably even need to consider redesigning your software from scratch. This is a very risky decision that some established DAWs don’t want to take. For example, it’s easy to support 64-bit if you developed the software with this in mind from the beginning. But if you have to do it later, it can be quite difficult to do, and this might explain why a lot of companies took a whole year to get it done. Because we’re starting fresh, it’s easier to meet our user’s expectations. So yes, we do have a chance in the long run.

What have been your main means of marketing Ohm Studio?

The project started as early as 2007. We made a lot of mistakes in the original DAW design. After a few years, we launched an alpha test, and almost nobody understood the software. The plug-in market turned out to be different from the DAW market. Being different is a good thing for the plug-in market. For DAWs, being too different is a very bad idea, unless you have a deliberate intention of fulfilling a need that other DAWs don’t. Users are also less tolerant with bugs for a DAW than for their plug-ins. We found out that a DAW should be virtually bug free. Now, we have an automated testing code that’s longer than the code being tested, and we are trying to push this technique in all the software to reach the maximum quality possible.

What have been your greatest obstacles in creating this DAW with regards to things like coding, funding, marketing, finding staff, etc?

We were lucky to quickly discover that bringing this technology to life was not a problem of coding, but rather about finding a robust mathematical model. There are some existing technologies that allow for the making of collaborative software, but they’re not suited at all for DAWs, since they were mostly made for text editors.

Funding was essential, as it allowed us to take the time to fine-tune the model, before we would actually implement it. Our first investor is none other than the state of France, as part of its innovation program called OSEO.

We were also lucky with the staff we have. Every one here is pro-active, and can work autonomously, while putting a strong emphasis on internal communication.

The GUI research took an important place in the process. The basis of any interface is to let the user understand his actions through the following questions : who, what, when. In a single-user environment this is quite easy : “who” is user, and “when” is the present. But in a multi-user environment, even “who” is a potentially difficult question. I think we found a nice solution to that problem, since our users report that feel that it’s very natural.

Any estimates on what the final release will be priced?

We will offer a limited free version next, for a standard monthly subscription, priced at €9. Some people would rather go for a one-shot price without subscription, and that’s something we’re still thinking about.

When can we expect Ohm Studio’s release?

We are fine-tuning some portion of the software, removing bugs and incorporating our premium code into the client. This should happen by the end of July. Parallel to that, we’re already focusing on Ohm Studio 2, and we started writing the code a month ago. This new version will have a totally new audio engine, and will include all the features that our users have been waiting for, and more. We already conducted some tests on the new engine, and results are just awesome.