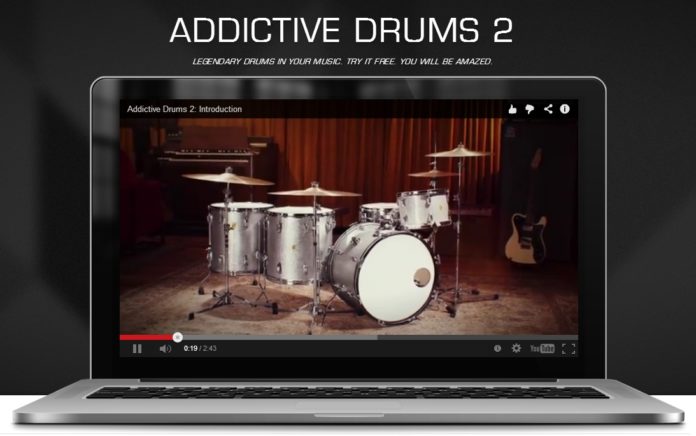 XLN Audio have just recently the sequel to their drum software, titled “Addictive Drums 2“, so Lars Erlandsson and I once again had a talk about the company and what can be expected from their new product. If you haven’t read our first interview, you can do so here.

We’ve grown and are now fifteen people, with new resources in the content, development, web and sales departments. Our current team is really strong, and creating “Addictive Drums 2” gave everyone a chance to show their excellence.

When did XLN start working on “Addictive Drums 2”, and how long did it take to create?

In a way, we started on it the day after “Addictive Drums 1” was released. Over the years, we’ve gotten a lot of great feedback from our users on what they would like to see happen, so we had a pretty good idea of what features would be useful. We also discuss a lot internally, as most of us make music ourselves. We officially started the project in September 2013, but by then we had a pretty advanced prototype already. Some of the features, like the “Tone Designer”, were a result of me doing labs in Reaktor on my summer vacation. The big challenge was to keep AD intuitive and smooth while introducing lots of new features.

Why did you guys choose to release a whole new version, rather than a regular update?

The mission from the get-go was to make a proper version two, adding many of the design elements from “Addictive Keys“, while building on the “AD1” core values of ease of use, speed and power. The whole software is built on a new platform, and it incorporates many parts of the “AD1” sound engine.

The reason we chose to make it a new product was that we have many pro users who would hesitate to upgrade if it meant their existing software was replaced by something that’s not as stable, or doesn’t sound 100% the same. We wanted the freedom to make “AD2” the best it could be, and the first priority was to make it sound awesome, whilst the second was to make it backwards compatible. In the end we managed to nail both – if you drag and drop an “AD1” preset onto “AD2”, it sounds 99.9% the same. From the feedback we have gotten so far, it seems we made the right choice. I hear some competitors are struggling with customers not being able to open old projects and so on.

What was the most challenging part of developing “AD2” for you guys?

The technology per se really hasn’t changed that much, but we’ve matured and grown as a company and as product designers. If I had to pick one thing, getting the “Transient Shaper” to sound great was a lot of work, but well worth it in the end!

Can you give me a brief breakdown of the new things about “AD2”?

There is a pretty comprehensive list on our website. For existing users I would say: Lots of new awesome sounding presets, and new functionality such as Kitpiece doubling/linking, new effects like the “Transient Shaper” and “Tone Designer”, drag-and-drop audio, and better Beats browsing.

For new users, apart from the feature set and workflow, you don’t have to buy a “full version” anymore – you can start with any ADpak. This goes for the bundles too; choose the exact content that works for your music. With the break up of the old “AD full version” and Retro ADpak content into smaller pieces, we now have 16 ADpaks, 27 MIDIpaks and 8 Kitpiece paks on offer, so we really cover a lot of ground.

Does this upgrade mean that we should expect “AD2” to be more of a CPU drain?

Yes, it does use more CPU. More things going on, basically. We’re always looking into ways of optimizing further, but as a plugin, there are things you simply can’t do, like using multiple cores. We’ll see what we can cook up though.

What’s been the best feedback that “AD2” has received from your users?

I think, “It sounds awesome“. The new Fairfax ADpak is partly responsible for this, and the free demo version of that is extremely popular. All the older ADpaks have gotten new presets as well, which make good use of the new sound-shaping features in AD2, so it all sounds punchier than ever. But you can also make it sound completely natural, if that’s your cup of tea!

Has “Addictive Drums 2” been used on any commercial music that you know of?

I know some testers used the beta version in commercials and so on. “AD1” is on so much stuff, I’m sure “AD2” will be too!

ADPaks like “Studio Rock“, “Studio Pop” and “Studio Prog” haven’t been promoted on your social pages that much. Do you guys have any campaigns planned for those?

The “Studio” kits are the three kits that used to be included in the full version of “AD1”. So they’re the most well-known kits we have, and with “AD2” they are available separately for the first time. We haven’t created new promo videos etc for them, but may do so in the future. As mentioned above, with “AD2” we’ve separated all old “AD1” products into separate kits and MIDIpaks. As an example, the old “Retro” pack for “AD1” has turned into three ADpaks, a few MIDIpaks and kitpece packs. Existing owners get all these new products when they upgrade.

The “Blue Oyster” pack sounds great. Can you tell about the process of making that?

Thanks! This was one of the kits in the old Retro ADpak. It was recorded in a large studio, with the goal of getting a thick and thunderous Bonham sound. I think the main components are the sheer sizes of the drums, the particular tuning, and the sound of the room.

XLN has also introduced the concept of “Bundles” for it’s Paks. Do you guys anticipate that this will lead to greater purchases?

We’ve had bundles in the past, but always with the contents pre-determined by us. Now we offer a more flexible way of getting more stuff at a better price, both for new and existing users.

What does the upgrade process look like for someone who wants to move from “AD1” to “AD2”?

It’s pretty straight forward: you buy the upgrade from our webshop, and this immediately creates “AD2” licenses for the “AD1” stuff you have. All the new products appear alongside your “AD1” stuff in the Online Installer, and “AD2” installs as a separate application. This means you can keep using “AD1”, and load up old projects, without risking that something breaks there. And you can load up “AD2” in the same project and start your migration process when and how you want. You can import your “AD1” presets by drag-and-dropping them onto the “AD2” interface, so it’s easy to replicate your “AD1” tracks with “AD2”.

With all the added features to “AD2”, are you guys even thinking about what “Addictive Drums 3” might look like?

No, not right now! We have some upcoming tweaks and fixes for “AD2” though, so it will continue to improve over the coming weeks and months.

Should we be expecting any upgrades to other XLN proudctins this year, like Addictive Keys or Electric Grand?

I can’t really comment on upcoming products, sorry! Thanks for this interview. Let me take this opportunity to wish you and all your readers a great summer!