In the world of digital mixing, Waves Audio is a well-known figure. The Israeli manufacturer of audio software is anything but a pioneer and major advocate of digital music tools. I sought out an interview with the Vice President of the company, Mick Olesh, who took time out of his busy schedule to answer my questions.

First of all, why the name “Waves”? Do you know what the thought was behind that name choice?

In 1988, when Gilad Keren and Meir Shaashua (Waves founders) were in the preliminary stages of creating the company, they simply decided that Waves would be an appropriate name.

Can you tell me about the origin of Waves, and how it got started? Was the intention always to make plugins, or did that come about unexpectedly?

Waves began in October 1992 with the introduction of the first audio Plugin, the Q10 Paragraphic Equalizer. The Q10 broke new ground in three major areas. First, it was the debut of the audio signal processor plugin, a tool commonly used today. Second, its graphic user interface gave users unprecedented control and eliminated the requirement for a DSP engineering background since it automated the filter coefficient calculations. Finally, the revolutionary Q10 offered sound quality equal to or better than many of its hardware counterparts.

Another highlight of Waves’ first decade of success was the development of the L1 Ultramaximizer, which established a new benchmark for dynamic controls.

How did the company end up expanding from Israel to the USA?

Gilad and Meir share music as their first love. They met through a mutual friend at a recording studio in 1982. In 1990 they both worked for a start-up called AudioAnimation. Two years later, Waves Ltd. was formed in Israel and in the U.S. simultaneously. It is a known fact Israel has a strong pool of professionals with good technical and development skills, so it made sense to have the technical base in Israel.

What exactly is your job at Waves, and what does your daily workflow look like?

My title is Executive VP of Sales & Marketing. Beyond that, we have a high management form that I am part of and I handle business development as well.

As a global company, we have a worldwide network of product specialists, distributors and dealers. The sales and marketing team have the overall responsibility to communicate with them daily. 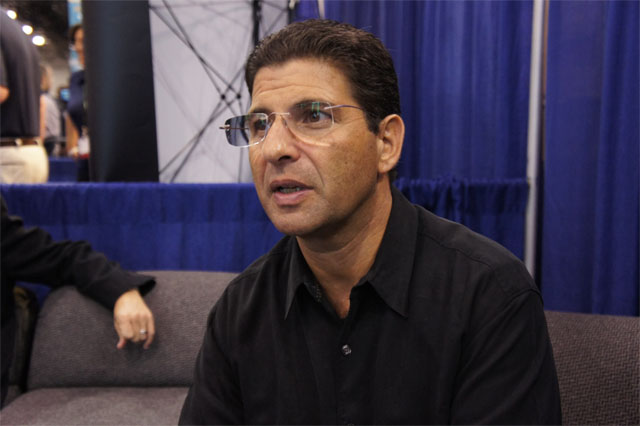 Who at Waves decides on which plugins to emulate? Is that a joint decision between groups of people, or is it something that one person decides? What does that process look like?

Every decision at Waves is a joint decision; emulating plugins is one of them. We have a yearly plan that goes through an ongoing revision process. In addition, consulting, sales, product management and colleagues in the industry all contribute to the decision process.

Many of Waves plugins are developed in partnership with some big audio engineers. How does Waves end up getting all these high-profile engineers on board?

The majority of engineers and producers (which we call “Artists“) are Waves users. In many cases the interaction works both ways.  They have ideas that they forward to us, or we open a discussion with them. We then proceed by developing a relationship via our Artist Relations department.

When it comes to emulations, is there a lengthy process involved? Do you need permission from the companies that created the original gear?

The majority of the Waves emulated products are with an Artist or with a manufacturer. Each trademark we use is covered by an agreement with the manufacturer or the Artist that the product belongs to.

I would imagine that each one is different, but on average, how long does an emulation plugin like Abbey Road REDD, CLA-2A or J37 take to create?

An emulation project can take anything from 10-36 months depending on the complexity of the product emulated.

Waves bundles have become a staple in today’s studios, but many young producers would find it near impossible to afford your higher priced bundles. Do you find that the Mercury, Diamond and Platinum bundles sell well despite this?

The world is a mix of DIY producers, students, top-winning Grammy engineers, live sound engineers,  DJ/Producers, film composers, etc, each of which has their distinct target, budget and requirements.

Our single plugin sales are much higher than ever before, while the bundles keep on track. There is an increase of young talent that understands the need for a toolbox of plugins that would differentiate them from one another. We provide the brushes and paint for each individual to create their colors and drawing.

Which bundle one has been the most commercially successful for you guys?

The L series of limiters and maximizers.

One of the most frequent comparisons that Waves receives is with the Universal Audio plugins. Do you guys have any sense of competition with those guys, seeing as many of your emulations overlap?

I have had a chance to talk to users who have mentioned they have UAD and Waves, each one for a different reason. There are probably some that would use either Waves or UAD. I don’t see much competition.

Has there ever been a worry that there might be too many Waves plugins? That maybe your own product line might become over-saturated with software that some customers may not ever use?

We base our development decision on research. It’s not about the number of plugins, but rather the flavor and style of each product. There are a vast number of genres and music styles, songs, productions etc. Each deserves a tool that ultimately serves its needs and makes it shine.

Our goal has always been to provide the best tools possible for a wide audio community, from all levels and genres.

Seeing as you guys have had such success in the software world, will Waves ever move into making hardware gear of its own?

Waves have always had a line of hardware products. The MaxxBCL, which combines award winning compressors, bass enhancements and limiting processors in a rugged hardware construction designed for live applications. The PuigChild, which is modeled on a rare Fairchild 670 from the collection of producer/engineer Jack Joseph Puig. It faithfully recreates the unmistakable sound of the original. And the DiGiGrid. Waves, and DiGiCo (the world’s leading manufacturer of live sound mixing consoles), joined forces to create advanced audio interfaces that provide users direct access to the Waves SoundGrid audio networking and real-time processing platform.

Whilst Waves has found success with its software products, a downside seems to be that your plugins seem to be a regular target of software piracy. How do you guys deal with that? Has it perhaps helped in getting your products into more hands, albeit illegally, or do you only view it as negative?

Obviously, piracy is illegal. Waves has been fighting illegal use of pirated software in more than one way, and we have won several court cases and settlements with illegal users.

Beyond the obvious statement declaring the use of piracy software as illegal, over the years, we have made our tools accessible to a significantly wider user base from a price standpoint, and especially in the way they are able to authorize and use Waves tools. We continue to refine and update our system in a way where the authorization and purchasing experience is made to be as easy as possible. Subsequently, we are attracting a user base that in the past could only dream of using our tools. Whereas nowadays, they are able to purchase the tools they require and move onto production without suffering from any illegal consequences.

Why not go the same route that UAD did with accelerator cards, to safeguard your software products?

At Waves we believe in providing tools that are cross platform (as long as it makes financial sense). Having our plugins locked to a hardware dongle that limits the users portability isn’t a solution we wish to enforce. Furthermore, having a hardware unit that governs the usage of the number of tools you may use doesn’t fit Waves philosophy and marketing strategy. On the contrary, our goal has always been to provide the user with the easiest and most efficient way of working which is achieved by our own authorization system (cloud based) where users can move their authorizations between systems, USB keys etc, which continues with the compatibility we maintain with most of the popular hosts and operating systems.

Do you think that Waves will only have more success now that the age of the DIY producer is here, where laptops and in-the-box mixing has taken off? Or are there downsides to that?

The expansion of “in the box” and “DIY producers” allows Waves to provide the quality tools producers and engineers have been using in the traditional manner to the up-and-coming talents, allowing these new users to enjoy the vast number of tools Waves have to offer .

What are you guys doing next? Are there are any more plugins in the works?

Waves are fortunate to have a long list of upcoming projects in the pro recording, live sound and consumer world.