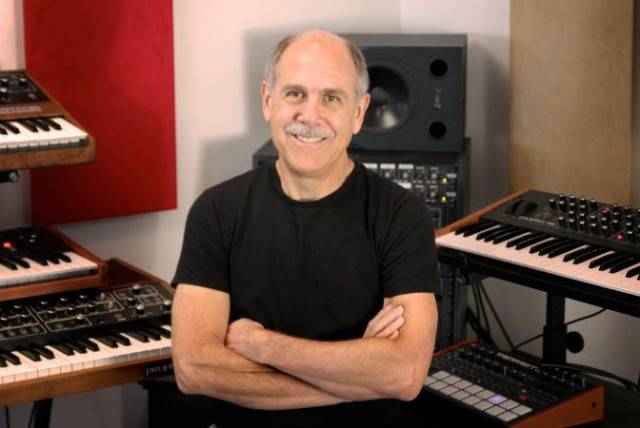 For over 40 years, Dave Smith has been contributing to the world of music by pioneering the technology that’s now in widespread use, whether through creating the first polyphonic synthesizer in the 70′s, or his role in the development of MIDI technology in the 80′s. I met up with him at the recent NAMM show to talk about his company, Dave Smith Instruments, and his career.

– Hi Dave. I assume that you’ve been coming to NAMM since the 70′s. How many have you attended at this point?

– Quite a few then. What are some of the newer products that DSI are showcasing this year at NAMM?

– Having been credited with making the first soft synth in the 90′s for Intel, how do you compare working with digital versus making analog synths?

Well, there’s always been digital components to all DSI instruments. The Prophet 12 is a good example. It has digital oscillators with analog filters. That’s because the analog oscillators can’t do what we wanted them to do, so we couldn’t use them, which is okay. We don’t take sides between analog and digital. We’d rather build the kind of instruments that we want. But we think an analog filter and signal path are important, so we put those in.

I don’t really count the soft synths I made in the 90s as being instruments. The problem with software is that if you don’t keep rebuilding it every year, they don’t work. So that synth might have worked in the mid-90s, but it won’t work today unless you have a computer from that period. So I went back to building musical instruments that will still work in 35 years like acoustic ones do.

– You did a joint interview with Roger Linn last year, and he had commented that digital synths would require significantly more processing power to produce sounds close to analog ones . Do you think that with sufficient processing power, it’s possible to make a digital synthesizer that could match an analog one?

Well, digital synths sound good; there’s nothing wrong with them. They’re just different, and it’s really hard to quantify that without using abstract words like “fat” or “warm”. But there’s something about it, and you have to play it for yourself to hear the difference and see whether it speaks to you or not. Many musicians say that the analog stuff fits better in a mix, which makes sense. It’s all about the subtle differences between the different oscillator voices.

– Do you think that there might still be some unexplored avenues with regards to bridging the gap between digital and analog? Arturia has made some pretty well-received emulations.

I haven’t looked into enough myself. I don’t really care, to be honest. I spent some time with physical modeling twenty years ago, and I thought it might be an interesting thing, but then at some point you realize that there’s not much of a point in modeling something that already exists. If I wanted to play a violin or piano, then I’d play a violin or piano; I don’t feel the need to emulate that. It’s understandable that there might be a need for having a portable keyboard that sounds like a piano, but it’s not interesting for me. I’d rather build something that has new sounds.

– I guess a lot of people feel like digital synths are just a cheap option to analog ones.

Yeah, that’s true. The great thing about the digital domain is that the products are cheap. That’s the main reason why people build it. It’s good that the technology is out there, because it gives people a place to start. It’s also great for synth manufacturers like me, because kids can start off with the software and learn how synthesis works. Then when they play the real thing, they say, “Oh I get it now “. Sure, the money thing is a drag, but if a synth has twelve analog voices, it’s going to be expensive. I can’t do much about that. But even those synths are selling really well for us because people appreciate the sound.

– Given how more people are getting into music-making these days, to what extent have you been able to scale the cost of making your analog synthesizer to make it affordable?

If you were to compare a Prophet 5 to a Prophet 12, the latter has more voices. The number of features on a P12 is multiplied significantly in comparison. A Prophet 5 cost $4500 in 1978, which is probably more than $20,000 in today’s currency. You used to be able to buy a car for less money than a Prophet 5. Yet, our Prophet 12 only costs $3000. So clearly, we’ve learned a lot about how to scale down and make affordable analog synths in comparison to the old days, even with the same filters. Today you can buy a four-voice analog keyboard for $1300. That was unheard of a few years ago.

– How long does it take for you to make a new synth product?

It depends. The Prophet 12 module was quick to make, since it was a spin-off from something that already existed. The keyboard version took about a year. We don’t tend to go way overboard on designing new things. The Prophet 12 does have a lot of new things in it, and the technology is different from what we’ve used before. Six to twelve months is the typical time frame it takes though.

– Tell me about the Mopho. Where did the concept for that synth come from?

Roughly speaking it’s a one-voice Prophet 08, with additional features like sub-oscillators and feedback. It also has a module version. A lot of people forget that it was the first low-cost module. When it came out, $400 for an analog synth was unheard of. Everybody and their brother are making low-cost analog synths now, most of which aren’t that programmable. It’s quite easy to build a simple, non-programmable analog synth. Even software companies are doing that now. But nobody’s been able to match the features of the Mopho at its price point. I don’t think anyone could, because they haven’t been doing it as long as we have. So our idea was to make a low-cost, high-quality, fully-featured monophonic synth. It’s not just one oscillator, two envelopes, a filter, LFO, and limited routing of modulation.

– How’s the Mopho faring for you, commercially?

It’s been great. The nice thing about our products is that they have a really long lifetime. We’ve been shipping Prophet 08 since 2007, and we’re selling as many now as we ever have. Whenever companies come out with a new product, it’s usually replacing their last one. “Here’s the new version that has more voices ” or whatever. When we come out with one, it’s an entirely new instrument. So a lot of people own both a Prophet 12 and a Prophet 08, since they’re different. That’s the same thought we had for the Mopho. We’ve been shipping them for a few years and they’re still chugging along pretty well.

– Given your background in developing both monophonic and polyphonic synthesizers, what are the advantages in using one over the other?

It really comes down to what you want to do. For us, there’s a cost factor of course. It costs more to make eight voices than one. Also, people usually play mono-synths differently. Even on the Prophet 08, people have a lot of unison patches, which is great for lead lines and basses. There’s no set rules, but polysynths are generally used for pads and chords, whereas monosynths are used for bass and leads.

– You mentioned last year that the Prophet 12 was your favorite synth to make. Why is that?

Well, it’s just a combination of a lot of things. You’d have to play it to understand it. It’s got the old analog soul, but also has a digital component. So you can make very piercing digital sounds that still retain a certain warmth to it. So it’s a hybrid synth with a wider range of features.

– Do you have any desire to make a synth that will top the Prophet 12 as your “best synth”?

We’re aiming to top any of our instruments. We’re working on one now that will come out in the summer. We’ve got an idea for some combinations of new things, but it’s not meant to be our “best synth ever”. If someone likes the Minimoog sound, they can go buy a Moog synth. We’re not going to put a Moog filter in our stuff just to sound different. Like I said about the Prophet 12 and 08, we’re selling both in equal measure because people like them as different instruments.

– When DSI works on building synths, does the company ever have to balance being creative versus being cost-efficient?

We don’t consider costs that much to be honest. We build the instruments we want to, and see what it ends up costing afterwards. We don’t think in terms of “This has to be $499 or $999 “. I have no idea how much the one we’re building right now will cost.

We’re lucky, because nobody else is making polyphonic synths, so we have the market to ourselves. When there’s no competition, business is good. Also, we’re not a huge company, so we don’t do a whole lot of promotion. As a result, new people keep finding out about us every year, and we still have people walking up to our booth who haven’t heard about us before. Then they try out our products and go, “wow“. Then they buy it and tell their friends. That’s how we keep going even though we’re not doing big campaigns.

– Touching on your work with MIDI technology, I’m wondering why didn’t you patent that. It’s a globally-used technology that you could have made a lot of money on .

I know, I could have made money on it, but the whole idea was to give it away to make sure that it happened. Also, there were five companies involved, so the money would have been split between us. But if there had been licensing restrictions and royalties involved, it would have just complicated everything. And it turned out to be the right thing to do, because 30 years later, MIDI is everywhere. If you take something from the 80s and plug it in today, MIDI works with it just fine.

– Final question. After having collaborated with Roger Linn to make the Tempest, do you think that there’s a chance you’ll work with other famous brands to make electronic instruments, such as Moog?

We’re competitors, so it’s not likely. So far, they seem happy to make variations of the same monophonic synth over and over, which is fine with us. We’ll keep building new instruments, and let them do what they do. Everybody seems happy.